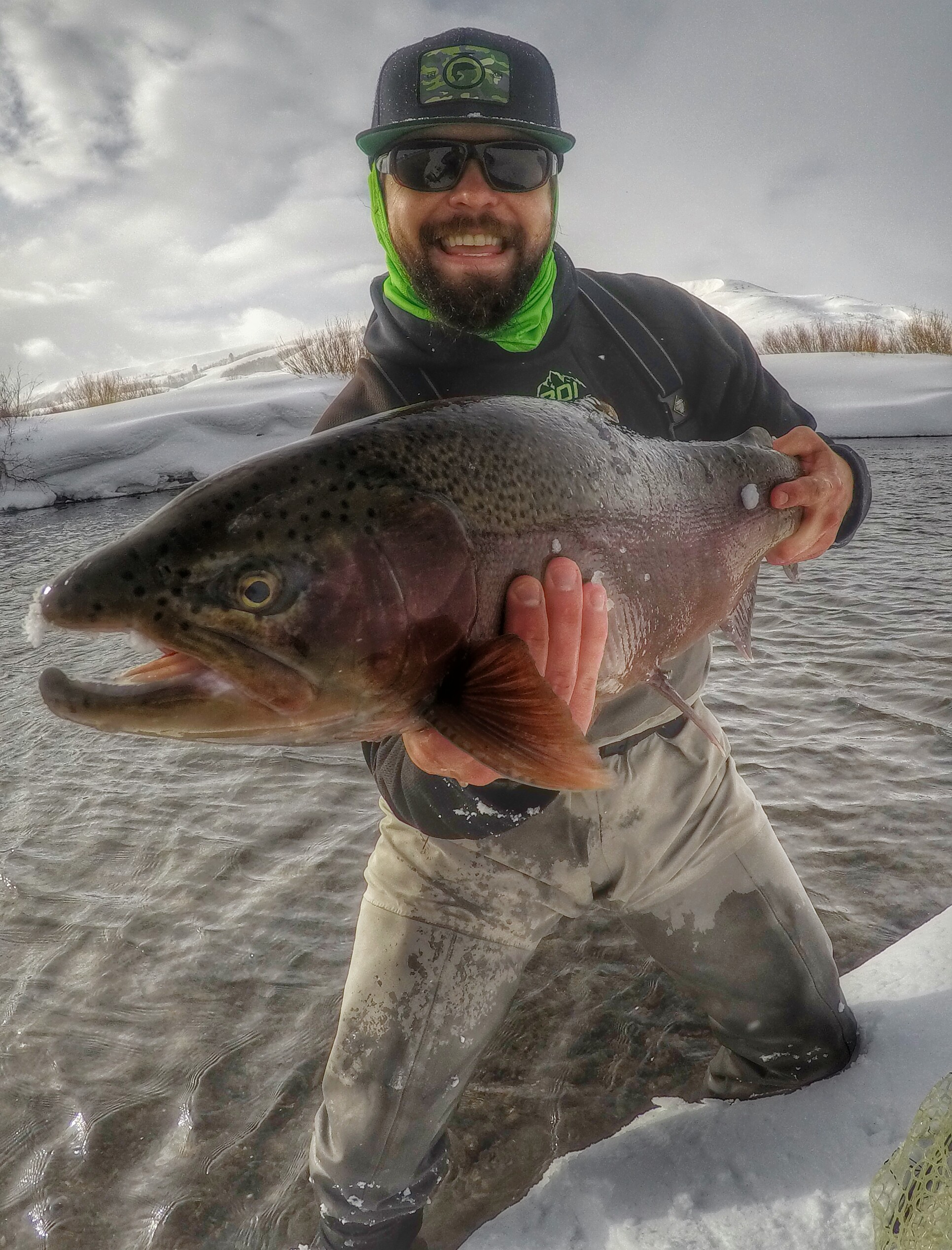 After years of fishing with my best buddy Sage, who truly introduced me to the sport, we have spent countless days on the drift boat, wading the big rivers of the West, and throwing streamers everywhere we can talking about what it takes to make the jump to that solid 24+” inch fish. After landing and taping many 22 inch plus fish on the Weber and many bigger waters, we always chat about the necessary adjustments. Is it more days on the water? Bigger streamers? Better luck? We have tried it all!

A most memorable day for me started at 4:30 A.M. with a chest cold and possible Nyquil hangover. We had plans to fish one of our favorite early Spring stretches and be the first ones there. The drive was blinded with snow, literally not knowing where we were at, and we asked each other multiple times if we should turn around and go get breakfast. We plowed through and moved forward! We made it to our pull off after getting the truck stuck only once, and rigged up our usual two streamer rigs with a single nymph rod to share.

The walk to the river was the worst I have ever encountered! Even with Sage leading the way and breaking trail, every step would break through snow drifts to your hip. After pulling your one leg out and gathering your dropped fly rods, the next one would sink! Eating snow for much needed hydration and trying not to die, we reached the river a solid 40 minutes after setting out.

Sage started with the streamer at the top of a great looking run with no interest. He took the nymph rod and hit a solid 22+ rainbow in his first couple casts. After a quick photo session and me still trying to catch my breath, he said I was up. He started working the streamer again below me. It took me a couple casts in snow and wind to get my bearings and with my first decent drift I went tight! I saw a huge fish moving downstream which I thought was spooked, but feet away from my indicator it was the fish I had actually hooked into. With lighter tippet and a fresh leader, I couldn’t move the fish and he did whatever he wanted. I realized the size and strength of the fish as he moved in and out of the current at his pleasure. I was on a 5 WT after being told to rig up a 6 WT and I was wishing I would have agreed. I would work the fish into the slower water at the back of the run before being pulled all the way back up to the very top to restart the whole process. Luckily I had a great coach who kept me calm and talked me out of my poor ideas to gain control of this fish.

In the 30 minute fight the seasons seemed to change. I started fighting the fish in snow, which switched the rain, then hail, then sun, then back to snow. My forearm in my small stature was burning. Knowing we had to make a move with a tiring out fish, I forced him into the slow water once again, just above some riffles leading to a very deep and troublesome run behind us! Sage was posted up with the Fishpond Nomad net in the riffles ready to end the battle. With little to no control on my end the fish headed down, right at Sage as I yelled “Hit him”! Sage was wise to let him go and not possibly miss and snap off my fine tippet. After regrouping in the deep, troublesome run that I was planning on avoiding, we talked about how big the fish truly was. I had negative thoughts about never seeing or feeling the fish again as I made one more strong pull to bring this bruiser into “chest deep” Sage with the net. Sage landed him and the celebration was more than exhilarating. I felt a great sense of relief as we celebrated with high fives, laughs, random noises I have never made and jokes of how long it takes me to land even small fish!

The fish was pushing 30 inches and we both agreed it was the biggest fish we had ever seen! After such a long battle the fly easily popped right out of his stretched out lip. One more strong pull and I would have been off!
All of our hard work, miles on the trucks, and studying seemed to pay off and I could not have asked for a better person to share such a great experience with!

We followed the day up landing plenty of great fish and kept debating with each other, and not knowing what a big fish is anymore? This leaves us on our next hunt, the next Big Fish! 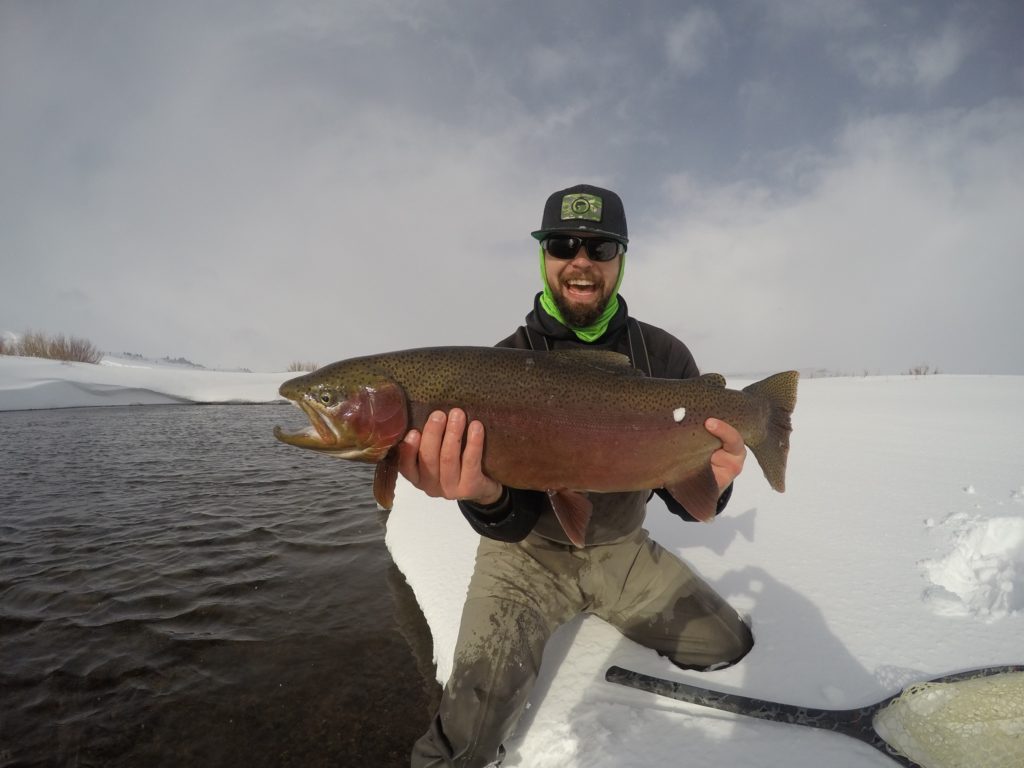 Leave a Reply to Shane aka shaggy Cancel Reply 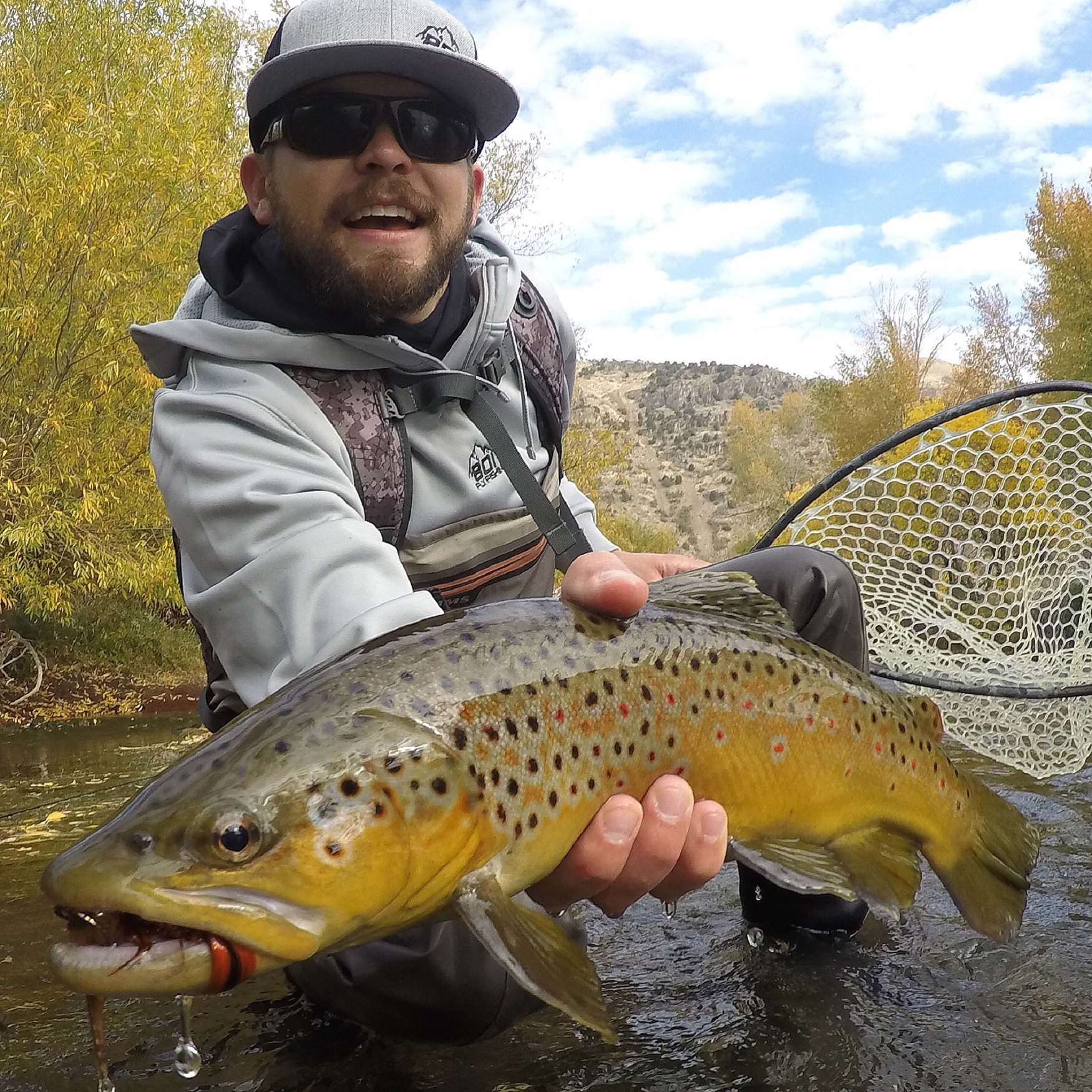